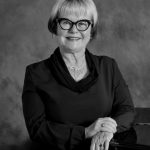 Heather Bedford-Clooney has a B. Mus. Ed, an ARCT (voice) and a ATCL and LTCL in Speech and Drama. She has done graduate work at the University of Alberta, Dartmouth College (New Hampshire) and Westminster Choir College (New Jersey).

Mrs. Bedford-Clooney has maintained a voice studio in Edmonton for 40 years. Her students regularly compete in Festivals at the local and provincial levels and, she has had students in the National Music Festival. Her students have gone on to be well known performers and teachers of voice.

Having done a great deal of musical theatre herself, she has been the musical director of productions of West Side Story, The Music Man, Cabaret, You’re a Good Man, Charlie Brown, Anne of Green Gables, The Fantastiks, Oliver and the Wizard of Oz. As well, she produces a Broadway Night annually for the Edmonton Columbian Choirs.

Mrs. Bedford-Clooney is as past winner of the Richard Eaton Award for Distinguished Service to Choral Music in Alberta (2008), an Alberta Centennial Medal (2005) ACF Con Spiritu Award (2003). In 2015, she was inducted into the City of Edmonton Cultural Hall of Fame. 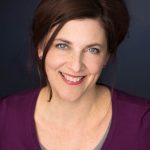 Elaine Dunbar is a teacher and performer of music and theatre with over 35 years of experience. She holds a Bachelor of Music degree in piano performance from the University of Alberta; an A.R.C.T. in singing performance from the Royal Conservatory; a B.F.A. in theatre acting from Ryerson University in Toronto; and has studied musical theatre at the Banff Centre. She is a member of the RCM College of Examiners and of the Canadian Actors’ Equity Association.

In addition to her work with the ECC, Elaine teaches private music lessons, is a vocal coach in the Theatre Arts program at Grant MacEwan university, is music director at Grace United church, is vocal coach and show band leader for two high school  music theatre programs in Sherwood Park, is co- founder of the children’s theatre company “Dramatic Learning”, and works as an examiner, adjudicator and performer.

Elaine has performed as an actor throughout Canada, has performed 2 seasons with Pro Coro choir, and was a member of the “Good Spirit” trio who performed at the Winspear in honour of the mayor’s birthday in 2010.

Elaine is grateful for her many fine teachers, and to her Mom, always

“Linda holds an ARCT and a Bachelor of Music degree in piano performance, studying under Dr. Ernesto Lejano at the University of Alberta, with a position as vocal accompanist at that time.  She had been a vocal coach/vocal and instrumental accompanist at The King’s University for 19 years, a performer with Opera Theatre of Alberta, and a piano examiner for The Western Board of Music.  A member of ARMTA and CFMTA, she gives workshops and masterclasses throughout Alberta, working with both pianists and singers, as well as acting as a music festival adjudicator.  Her private music studio consists of students of all ages and levels, working on piano and voice skills, as well as advanced theories, including Harmony, History, Counterpoint, Analysis, and Pedagogy.  She makes time for free-lancing as an instrumental/vocal accompanist for exams, festivals, recordings, auditions, competitions, and recitals, as well as accompanying The Festival Singers in Sherwood Park.  She has accompanied for the Edmonton Columbian Choirs for many years.”